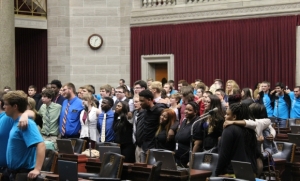 JEFFERSON CITY, Mo. – When a young person is unable to pay court-related costs, he or she can face what’s known as “debtors’ prison,” a practice a new report says can pull them deeper into the juvenile-justice system. In Missouri, these fees and fines include the cost of court operations and restitution. According to the Juvenile Law Center findings, when a family can’t pay up, a young person can be placed in a secure facility or have their probation extended.

Associate director at the center Jessica Feierman calls it a punishment for being poor.

“We’re creating two separate systems of justice,” she said. “This is really a glaring example of justice by income. We really can do better. We can set a system that’s fair to all young people, not just the ones who have access to money.”

Mae Quinn, director of the MacArthur Justice Center in St Louis, said slapping a huge fine on a young person who is still in school makes them feel hopeless and that they’ll never get out of debt. She said often they skip court and end up with a warrant issued for their arrest.

“People don’t realize that in Missouri, children as young as 15 can be prosecuted in our municipal courts, without a lawyer, without specialized treatments really, and they may agree to fines and fees that in the moment seem like something they can handle but obviously they can’t,” she explained. “They’re still in high school, they don’t have jobs.”

“Should I pay for my one child’s school uniform or my other child’s court fees? Is it worth going into debt so that I can pay off these fees? That’s a strain on a family that’s not going to help either the child or the family,” Feierman added. “We’re just deepening the cycle of poverty.”

Other penalties for nonpayment noted in the report include prevented expungement, additional court visits, parents held in contempt and family debt.

The full report can be found here.

Posted on September 14, 2016, in News. Bookmark the permalink. Comments Off on Young People in Missouri Facing Debtors’ Prison.